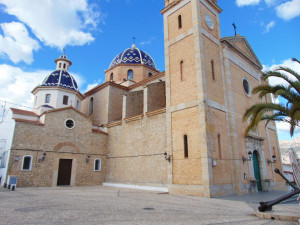 The space it originally occupied was greatly reduced due to the presence of the castle next to the church inside the walls. The castle, demolished in the 19th century, is thought to have been designed by Cristóbal Antonelli. It was a perfect square structure with sentry boxes at three of its corners and a rhomboid shaped tower which defended the Polop Gate to the west of the town. Part of the wall was used to build the viewpoint area, where beautiful sea and town views may be contemplated today.

The former church was commissioned in 1617 by D. Francisco Palafox, Marquis of Ariza and Lord of the Calpe and Altea baronies, and built by the   Pere i Damià de la Cámara brothers. By the 19th century it was in ruins. The Capilla del Cristo chapel was inaugurated in 1854 as a separate building. A traditional piece of architecture, it was incorporated at a later date to the new church as part of the transept. The church is defined by a great central dome, covered with curved blue and white glazed tiles, over a slender lintel and lateral chapels. It has a square bell tower to the left of the façade.

The architecture of the interior contrasts with the bare unassuming external brick walls, of franciscan simplicity, with a linteled main entrance door. Its structure partly coincided with the outline of a former temple, the transept of the new church was made to coincide with the chapel built a few years earlier, resulting in the church we know today.
Calle Mayor street

The Calle Mayor street, which links the Portal Vell gate to the Church Square, has conserved its original course It is paved with white and black pebbles, giving it a distinctly singular character. If closely observed, the union of the original temple with the new church may be seen. The walled arch provides depth to the end of the street .The dressed stonework at the corner of Calle Mayor street and Calle Salamanca street is also worthy of mention.

(This information is published in Guia de Altea by J.Miguel del Rey)