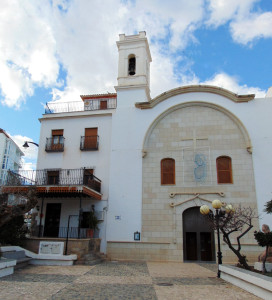 We are now at the Plaza del Convento square, where the old Casino de Jaumet once stood, a beautiful house built with black stone, with its close fitted terrace based on wrought iron columns, attached to the convent bell tower. Later called Casino de Peparra, it was a typical mid- 18th century liberal casino frequented by Altean society, The San Francisco churc which presides the square was formerly part of a Franciscan convent built in mid-18th century, disentailed in 1836. Unfortunately, the convent was demolished in the 60’s.

Continuing up calle Pont de Montcau street, we come to today’s Casa de Cultura, a solid building belonging to middle-class landowners, built in 1886. Opposite is the Costera Mestre Música, a traditional street of a great many steps in the les Costeres neighbourhood, an example of the 18th century urban expansion outside Altea’s fortified walls. We continue up this street to the ruins of the ancient Molí de Bellaguarda watermill.