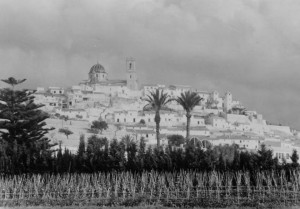 We are now at the railway installations inaugurated in 1914 which include a station, railway lines, platforms, train sheds and stands. These installations helped to modernise the area a little, housing the town’s first hotels and hostals. This character was kept until well into the 20th century.

Opposite is the L’Hort de la Campaneta, one of the few houses with walled orchards that have survived from the 19th century. Named after a little bell that hung over a gate next to the house, (now installed in the San Francisco church), Its architecture employs very fashionable local referential elements of the time, closely related in form to the parish church domes.

Leaving the railway lines on the right, we continue up the steps leading to calle Alacant street.On the left is the Municipal Professional Music Conservatory. Continuing along the calle Sol, one of the most visited streets in Altea, we come to the end of our route, the Portal Nou gate, at the Carmelina Sánchez Cutillas square. 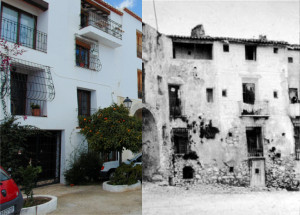 The Town Hall and Court House Bastion (Lost element):It was a defensive element in the north-east angle of the wall .Situated at the end of the   Carrer de la Carnisseria (calle Santa Bárbara today), beside the prison alley. A small stairway attached to the wall lead up to the Town Hall. Access was by an antechamber which lead to room where the Altea jury members met, occupying both units with a wooden deck structure in its interior. Light was provided through windows to the east and south, with orifices in the walls for artillery towards the north. Next to this room was the municipal secretary’s chamber. It was demolished in 1911.

(This information is published in the Guia de Altea by J.Miguel del Rey)